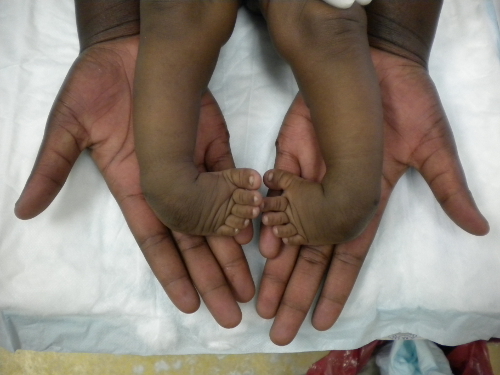 Clubfoot, or talipes equinovarus, is a treatable birth defect that affects approximately 150,000-200,000 children each year. Clubfoot is the most common musculoskeletal birth deformity.

It is a congenital condition, meaning that when it occurs it is always present at birth. One or both feet may be affected, and about 50 percent are bilateral cases. Clubfoot is now generally thought to develop after the first trimester of pregnancy and can sometimes be picked up on ultrasound from about 20 weeks.

Parents will know at birth if their child has clubfoot because the foot will be twisted inward and rigid. Some cases are diagnosed before birth during a routine ultrasound. If you are wondering if your child has clubfoot, contact a specialist doctor who has experience in diagnosing this condition (not all paediatricians know how to diagnose clubfoot).

The worldwide average rate of occurrence is about one per 1000 births (some sources say 1:750). Studies report that for Southern and East African blacks the occurrence is higher (2 to 3 per 1000 births)*, affecting about 1 in 500 children born in the region. There are almost 11,000 children born with clubfoot in Southern Africa every year, around 2,000 of them in South Africa. It occurs about twice as frequently in boys.

The congenital clubfoot appears to be of genetic origin, but no one is entirely sure what causes it. Most cases are idiopathic (unknown cause). Some families report having a history of it, but in others it is apparently an isolated case. If either of the parents were born with clubfoot, there is a higher chance that their children will have it; if one parent is affected with clubfoot, there is a three to four percent chance that the offspring will also be affected. When both parents have clubfoot, their children have a 15% chance of developing clubfoot. In one study it was concluded that if a family already has one baby with clubfoot, the chance of having another increases to 1 in 35.

The condition is not painful for the newborn, but walking with an uncorrected clubfoot can be very painful and difficult, if not impossible.

Many older children live with the burden and stigma of neglected or relapsed clubfoot. Neglected clubfoot has a long-term impact on a child’s quality of life. Children in rural areas or depressed socio-economic conditions are more affected by the lack of access to adequate care or information. These children face a life of disability due to untreated clubfoot.

Clubfoot must be corrected in order for the child to walk properly. It is not difficult to correct. However, which treatment to use has been a subject of controversy for over 150 years. Although surgery became more popular than manipulation and serial casting during the 1950s, towards the end of the 20th Century, there was a growing demand for non-surgical techniques, particularly the Ponseti Method, as it became better publicised. The Ponseti method is now the international standard of best practice for clubfoot treatment, endorsed by all major paediatric orthopaedic associations worldwide.

Over sixty years ago Dr Ignaçio Ponseti developed a method for treating clubfoot that requires the use of full-length plaster casts and special protocol. The ‘Ponseti Method’ consists of using a series of casts, gentle manipulation and the use of a special brace. This treatment is over 95% effective and it is the most cost effective treatment with no side effects. Treatment should start soon after birth. In infants the method takes about 4-6 weeks of plaster casts, changed weekly. For older children or complex cases more casts are usually required.

After correction, clubfoot deformity has a tendency to recur. To prevent recurrence, a foot abduction brace must be worn full-time for 3 months and then at night until age four. The clubfoot brace consists of shoes attached to an adjustable bar at a specific width and angle.  The brace helps to retain the feet in the corrected position and is the most effective way to avoid recurrence.

Dr Ponseti says in his book:

“A well-conducted orthopaedic treatment, based on a sound understanding of the functional anatomy of the foot and on the biological response of young connective tissue and bone to changes in direction of mechanical stimuli

[correct manipulation of the foot ligaments, joint capsules, and tendons followed by casting in the new position] can gradually reduce or almost eliminate these deformities in most clubfeet. Less than five per cent of infants with very severe, short, fat feet with stiff ligaments unyielding to stretching will need surgical correction. The parents of all other infants may be reassured that their baby, when treated by expert hands, will have a functional, plantigrade foot which is normal in appearance, requires no special shoes, and allows fairly good mobility.”